Village 360 began because the founder of Village 360 was a single mother when she was casually told she had a mass that was cancer. She came from a large family and they were aware of many ways to help, but didn’t know what avenues to take for emotional and physical nourishment. This need does not go unfulfilled any longer with Village360. My introduction to cancer happened at an early age.

The first in my family to lose their battle to cancer was an uncle whom I did not have a close relationship with. I just knew I had to go to a funeral because he had passed of Cancer. A majority of Cancer stories end that way, but mine got more complex.

My dad was diagnosed with stomach Cancer in 1988 and lost his battle on Thanksgiving of 1989. That is when I had to learn to deal with the disease a little differently.

After that, I lost the remaining aunts and uncles from my dad’s side to various forms of cancer. I had hoped that would be the end of it, but then my mom was diagnosed and I became her caretaker, watching as she slowly lost her battle. While helping her fight, I would try to find places for assistance while she was in treatment. It was so hard! She always had the wrong type of cancer for the places we went. Thankfully, we were sometimes able to get help from her church.

My first personal brush with cancer was when I had my thyroid removed because it was loaded with tumors. And the worst part? Taking those radioactive pills! They tell you to stay away from your kids for a while (not possible when you are a single mom) and since I lived away from family, I was lacking a support system to help me deal with the surgeries and every-day issues of treatment though I had a few friends who did what they could.

Then one day, I got a call that devastated me. My doctor demanded I come in right away because of the results of an MRI. When I arrived, the doctor said they found a mass behind my eye. This was the last straw! I really wanted to give up, but I thought about my kids and decided to fight because of them. That surgery was hard and I had little support, but we made it through.

A few years later, I coded during a treatment. My son was home alone and as there was no one with me at my treatment, there was no one to notify him (or any of my family) of what was happening to me until late that evening. That was nine hours after I was due to arrive home.

Not long after that, I found out my baby sister had colon cancer. She battled for a long time and things looked good, but she had to endure her chemo treatments alone because her husband was deployed, and I and our other sisters were scattered across the country, states away. Sadly, she lost her battle to Cancer but that loss gave me the wake-up call that I needed. It was then that I decided to do something.

I could either stay mad at the world or do something to help others who were battling the same.

I also want to ensure that those who care for someone with cancer don’t become overwhelmed as there are so many extra tasks needed simply to help their loved ones survive the day-to-day.

Village360 began from a need to see that no one else has to face cancer alone. 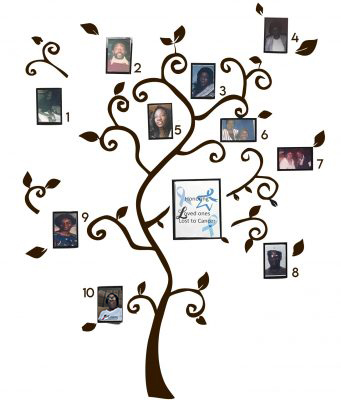 Our clients, partners and champions can depend on us and trust our reliability.

I want to thank Village360 for all its help. Being single with no children having their Help after my procedure was a godsend.
K. NikiaClient
When I lost my hair I was not sure what to do besides cry, Village 360 was there and took care of things and now I feel whole again.
L. E. B.Client
I've always known Bo for her big heart . She's been there for me when I needed her.
B. JohnsonDonor
When I was at a point when I didn't know who else to call on, Village 360 was there.
T. StewartClient
I feel like I no longer look sick.
JacquelineClient
Previous
Next